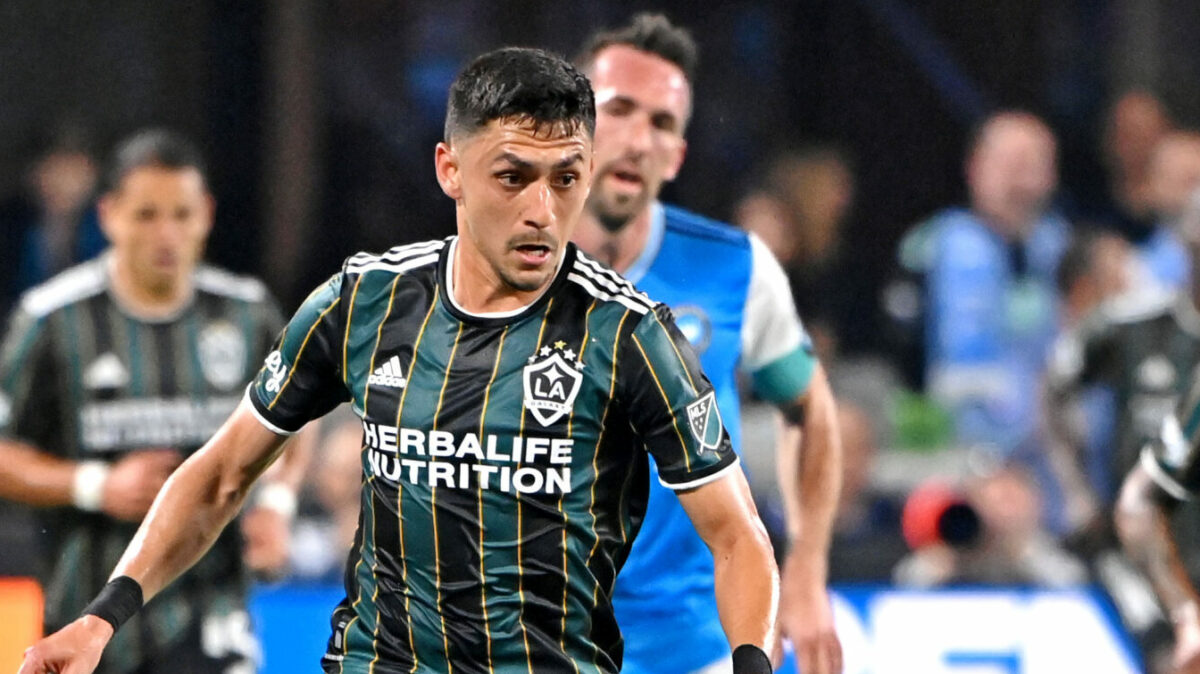 Charlotte FC is still working out the kinks as an expansion team in Major League Soccer, but the league’s latest edition enjoyed an impressive debut from its fans, who put on a show on a night when the LA Galaxy succeeded in spoiling the party.

Efrain Alvarez played the hero for Greg Vanney’s side in Charlotte, delivering a sensational winning goal for the visitors to stun the record-setting crowd of 74,479 in attendance for Charlotte FC’s first home match.

Alvarez’s 77th-minute blast was all the Galaxy needed to earn a 1-0 victory and move to 2-0-0 in the 2022 MLS season. The Mexican international silenced the Charlotte FC faithful and also delivered on the defensive end as the Galaxy picked up a second shutout of the new campaign.

Lewis Morgan stole the show for the New York Red Bulls on Saturday, registering his first MLS hat trick in a 4-1 romp over Toronto FC. Gerhard Struber’s squad scored all four of their goals in the opening half, with veteran defender Aaron Long also getting on the scoresheet.

The Colorado Rapids rebounded from an opening weekend loss in California by shutting out Atlanta United 3-0 at Dick’s Sporting Goods Park. Diego Rubio was Man of the Match for the host Rapids, scoring the opening goal and assisting on Jonathan Lewis’ finish later in the match.

Francisco Calvo helped spark a comeback for the San Jose Earthquakes at PayPal Park, scoring a pair of late goals in a 3-3 draw with the Columbus Crew. Despite the Quakes scoring a ninth-minute opener, the Crew battled their way back with Lucas Zelarayan and Gyasi Zardes both ending up on the scoresheet. Calvo’s headers in the 84th and 96th minutes respectively helped Matias Almeyda’s side earn one point at home.

Here is a closer look at all of Saturday’s MLS results, with Sunday’s action coming in throughout the day:

Man of the Match: Mamadou Fall’s late equalizer helped LAFC earn one point at home and overall the centerback did well in all aspects on Sunday. Fall also won seven of 10 duels and made 10 recoveries in the draw.

Moment of the Match: Just when it looked like the Timbers were going to sneak out of Banc of California Stadium with three points, Fall’s close-range finish tied things up. The pressure from LAFC paid off as Steve Cherundolo’s side escaped a home loss.

Match to Forget: Claudio Bravo hampered his team’s chances at an important road win by being ejected just after the hour mark. Bravo’s pair of yellow cards put the Timbers on the back foot and ultimately led to an equalizer from LAFC.

Man of the Match: Sebastian Driussi scored twice for Austin FC, putting in a Man of the Match performance for Josh Wolff’s side. Driussi also won the most duels (12), completed the most dribbles (5), and was a thorn in Inter Miami’s side for his entire 90 minutes.

Moment of the Match: Driussi’s second goal totally killed Inter Miami’s comeback hopes as the Argentine poked home from an error at the back. Inter Miami cut the deficit not long after to 3-1, but Austin FC continued to roll to pad the final score at 5-1.

Match to Forget: Christopher McVey gifted Austin FC’s third goal of the afternoon and overall looked out-of-sync with Brek Shea and Jairo Quinteros in the backline. The Swedish defender will hope for a bounce-back performance next weekend.

Moment of the Match: FC Dallas midfielder Paxton Pomykal stuck his boot in at the wrong time, taking down Gil in first-half stoppage time to draw a penalty kick. A VAR review showed Pomykal caught Gil as the Spaniard sprinted through the box. Gil scored the game’s only goal on the ensuing spot kick.

Match to Forget: Jesus Ferreira struggled to make his mark at center forward. FC Dallas struggled to keep possession against the Revs’ energetic midfield, leading Ferreira to feel stuck on an island. Ferreira started a few attacking chances with his passing in the second half, but it wasn’t enough to find an equalizer.

Man of the Match: Lewis Morgan had four career MLS goals coming into Saturday’s game and almost double his entire tally in one match. Morgan was a live wire from the opening whistle and carried the Red Bulls to a first win of 2022.

Moment of the Match: Aaron Long’s goal before halftime truly killed off any TFC comeback, condemning Bob Bradley’s side to a dismal result on home soil.

Match to Forget: Jacob Shaffelburg was torched on several occasions by Morgan before being substituted at halftime.

Man of the Match: Sporting KC winger Johnny Russell was dangerous throughout the match, with four key passes. Russell maneuvered past two defenders to drive a low cross in, which led to game’s only goal.

Moment of the Match: Sporting KC claimed the advantage in a tightly-contested match with Remi Walter’s goal in the 60th minute. Walter pounced on a second ball coming off a chance at scoring started by Russell.

Match to Forget: Dynamo midfielder Memo Rodriguez struggled to get much going in the attack, and he lagged behind the rest of the team’s midfield in passing accuracy and quality in possession.

Man of the Match: Daniel Gazdag scored the winning goal for the Union, helping cap off a comeback win. Gazdag also won five duels before being replaced in the 76th minute.

Moment of the Match: Djordje Mihailovic had a goal ruled out by VAR for a foul committed upfield. CF Montreal went from thinking it had a 2-0 lead to still being in range, which the Union eventually capitalized on.

Match to Forget: Rudi Camacho had a hand in both Union goals, attempting an ill-advised pass in his own penalty area that led to an equalizer before later being beaten on the sequence for the Union winner.

Moment of the Match: Calvo’s 96th-minute header completed the comeback for the Quakes, giving Matias Almeyda and his players a lot to feel proud of.

Match to Forget: Jamiro Monteiro was sent off in the 33rd minute, putting his team under major pressure for the rest of the match. Monteiro will now miss a return to Subaru Park next weekend.

Man of the Match: Bill Hamid’s six saves were crucial in keeping D.C. United in the game and made the difference down the stretch when it went down a man late in the game thanks to a Moses Nyeman red card.

Moment of the Match: Geoff Cameron’s handball call deep into second-half stoppage time. It muted what was shaping up to be a respectable performance from Cincinnati. The action set up a penalty opportunity for Ola Kamara, and he made no mistake with the golden opportunity to steal the win.

Match to Forget: Cameron’s mistake was too costly to overlook. His handball deep in stoppage time kept FC Cincinnati from earning its first point of the season.

Man of the Match: Gaston Gimenez dominated from his midfield position, winning the most duels in the match and also completing the most tackles. The Paraguayan kept Orlando City’s attacking midfielders in check, helping the Fire register a second-straight clean sheet.

Moment of the Match: Orlando City though it snatched a second-half winner in the 73rd minute but VAR ruled out Junior Urso’s finish due to a handball in the build-up play.

Match to Forget: It was a quiet evening for Kacper Przybylko, who finished with one shot on goal and a match-lowest 28 touches. Przybylko hasn’t gelled in the Fire attack so far and will look for better performances starting next week.

Man of the Match: Diego Rubio not only scored the go-ahead goal for the Rapids, but also assisted once in the shutout win. The Chilean also won the most duels in the match (11) and was a thorn in the Five Stripes backline all night long.

Moment of the Match: Jonathan Lewis added Colorado’s second goal of the night, padding the Rapids lead and truly giving the hosts some breathing room in the match.

Match to Forget: Miles Robinson was sent off in the loss for Atlanta United, picking up two yellow cards. The USMNT defender couldn’t help the Five Stripes shut down the Rapids attackers in the defeat.

Man of the Match: Hany Mukhtar set up Nashville SC’s goal with an excellent pass, could have had a second assist with another top layoff, and finished with a game-high four shots.

Moment of the Match: The Loons succeeded in creating chances out the gate in the second half, but they earned a point with Hassani Dotson’s 71st-minute tap-in from just off the goal line.

Match to Forget: Nashville goalkeeper Joe Willis faltered in the game’s defining moment, as he couldn’t secure a deflected shot from Luis Amarilla. Willis reacted too slowly after a deflected Loons shot hit the post and the ball settled in front of goal, and Nashville missed out on a 2-0 start and three points from a road match.

Man of the Match: After a nightmare 4-0 result last week against the Crew, Thomas Hasal showed why he is backed by the whole organization. His four saves were highlight material against difficult shots that would have opened the game wide open from the start.

Moment of the Match: In the 89th minute, Thiago Andrade connected a Santiago Rodriguez cross that was tremendously pushed over the bar by Thomas Hasal. The homegrown keeper’s jumping one-handed save was enough to earn the shutout for the home side.

Match to Forget: Valentin Castellanos’s playing time was cut short to 64 minutes due to his ineffectiveness for a second straight match. Last year’s Golden Boot winner only won two of his 10 duels, and with only five total shots in the first two games. It will be interesting to see if this is a short- or long-term slump for the Argentinian.

Man of the Match: Real Salt Lake had no shortage of chances to score, but it was Bobby Wood who made the onslaught count. Wood scored the game’s only goal and had three shots

Moment of the Match: Bobby Wood claimed the advantage for Real Salt Lake right away in the second half, scoring in the 46th minute. Wood made a run into the box, connecting with a cross from Maikel Chang, then finished off a blocked shot.

Match to Forget: Albert Rusnak’s return to Utah didn’t quite go according to plan as he finished with zero shots and just one key pass in a quiet match.

Man of the Match: Raheem Edwards was solid in defense at left back for the Galaxy, but for the second week in a row, Edwards made his impact on the offensive end, providing the game-winning assist to Efrain Alvarez.

Moment of the Match: Efrain Alvarez stole the show with a must-see goal that ended up being the match-winner.

Match to Forget: Karol Swiderski was brought in by Charlotte FC to provide goals and be a key member of the attack, but he failed to live up to his Designated Player designation in Charlotte’s first regular-season match at home, contributing just one shot before he was subbed out in the 70th minute.