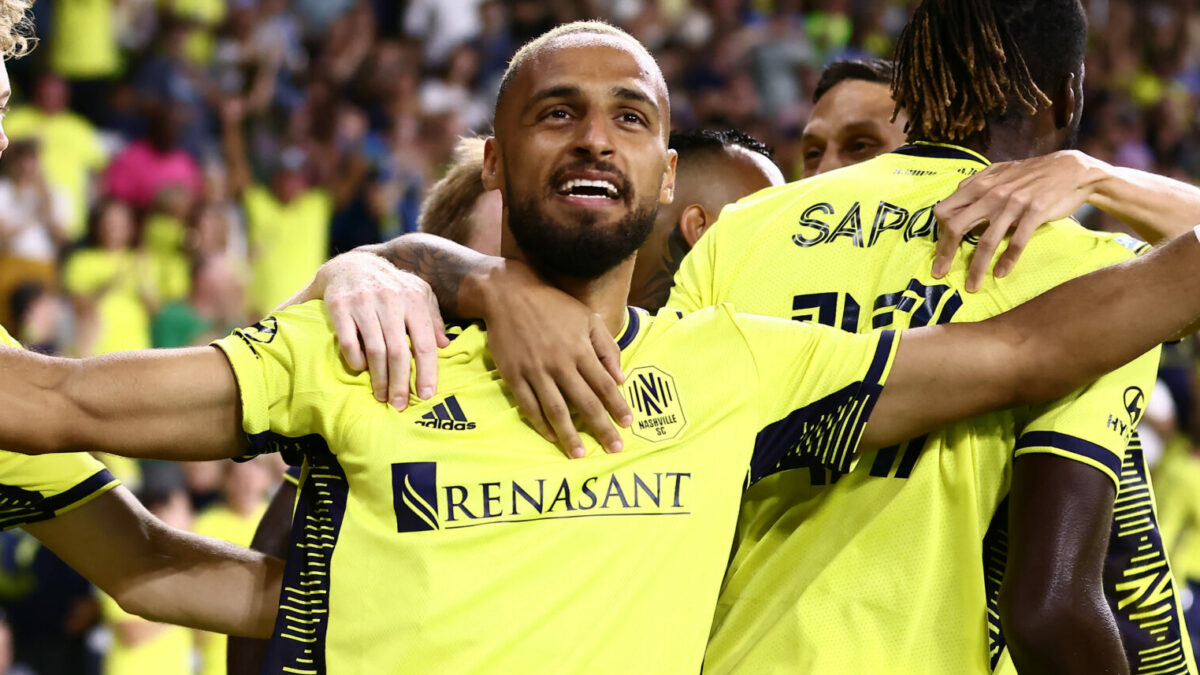 The only two teams to pick up home victories in Sunday’s MLS slate got to celebrate in style after cruising to emphatic results.

Nashville SC and Sporting KC both claimed three points on Sunday, with 4-0 and 4-1 wins respectively. Gary Smith’s side pummeled FC Dallas with Hany Mukhtar continuing his quest for MVP in 2022. Mukhtar scored twice and assisted once at Geodis Park while FC Dallas offered little threat with Jesus Ferreira not in action.

Sporting KC claimed its second win from its past three matches, cruising past the Portland Timbers 4-1 at Children’s Mercy Park. William Agada was Man of the Match with two goals and one assist while Erik Thommy continued his impressive run of form in SKC’s midfield.

Orlando City used an 89th minute winning goal from substitute forward Tesho Akindele to defeat Charlotte FC 2-1. It was the second-consecutive win for Oscar Pareja’s squad, which keeps them in the top five in the Eastern Conference.

Whether the Philadelphia Union can catch Los Angeles FC in the Supporters’ Shield race, it’s clear to see the Union will have a strong shot at an MLS Cup run.

Jim Curtin’s side dismantled D.C. United on the road, with Julian Carranza scoring a hat trick twice against the same opponent this season. The Union showed its chemistry and depth in attack to notch its second win in the span of a week.

Austin FC stumbled to a 2-1 loss to Minnesota United, which has won three of its last four matches. Emanuel Reynoso scored a penalty for his tenth goal of 2022, and Franco Fragapane capitalized on a mistake at the back from Austin to score the winning goal.

In the night’s other matches, CF Montreal dispatched a beaten-down Revolution and FC Cincinnati earned a point on the road against the Red Bulls.

Here are the results from Week 26 in MLS action.

Man of the Match: Cucho Hernandez stepped up for the Crew, scoring twice in a six-minute span to help Caleb Porter’s side salvage one point at home.

Moment of the Match: Juan Purata’s 77th minute equalizer helped Atlanta United claim one point away from home in a four-goal thriller.

Match to Forget: Derrick Etienne was quiet for the Crew, losing six of seven duels and picking up one yellow card.

Man of the Match: Santiago Rodriguez scored once and assisted once to lead NYCFC to an important road victory over the Chicago Fire.

Moment of the Match: Rodriguez’s goal early in the second half padded NYCFC’s advantage at Soldier Field.

Match to Forget: Rafa Czichos’ error led to one of NYCFC’s two goals, a surprising mistake from the 32-year-old German defender.

Man of the Match: Facundo Torres did it all for Orlando City in Charlotte, drawing the most fouls, winning the most duels, creating the most chances, and registering one assist.

Moment of the Match: Tesho Akindele came off the bench and snatched three points for Orlando City, scoring at the death in Charlotte.

Match to Forget: Karol Swiderski was ineffective for Charlotte FC, losing the most duels and failing to register a single shot on goal.

Man of the Match: William Agada netted two goals in the lopsided home victory for Sporting KC, showing his importance in front of the Timbers net.

Moment of the Match: Agada’s second goal of the match put an exclamation point on an emphatic result for SKC.

Match to Forget: Diego Chara lost the most duels in the match (10) and struggled to deal with Agada’s creativity in the heart of midfield.

Man of the Match: Hany Mukhtar continued his impressive season with two goals and one assist in a needed win for Gary Smith’s squad.

Moment of the Match: Mukhtar’s second goal of the match truly put Nashville SC in cruise control for the remainder of the match.

Match to Forget: Jose Martinez and Matt Hedges failed to deal with Nashville SC’s attacking players, coming up short on the night.

Match to Forget: Brenner lost eight of 11 duels and only had 29 touches in the match, being held in check by the Red Bulls defense.

Man of the Match: Romell Quioto scored twice and assisted once as CF Montreal rolled past the Revolution.

Moment of the Match: Quioto’s second goal of the match continued a dominant night for CF Montreal.

Match to Forget: Djordje Petrovic conceded four goals, having a forgettable night in between the posts.

Man of the Match: Julian Carranza continued to show his worth in the Union’s attack, scoring a second hat trick against D.C. United this season.

Moment of the Match: Carranza’s second goal early in the second half continued a dominant night for Jim Curtin’s squad.

Match to Forget: Tony Alfaro conceded one penalty kick and struggled to deal with the dynamic Union attack, along with the rest of the D.C. United defenders.

Moment of the Match: Insigne’s late effort looked destined for the top corner but Drake Callender denied the Italian for a second time.

Match to Forget: Alex Bono’s error led to one of Inter Miami’s two goals which hurt Toronto FC’s chances at any points.

Man of the Match: Emanuel Reynoso scored once to continue his stellar season for Minnesota United. He also created the most chances and most dribbles in the match, to go along with the penalty kick he drew.

Moment of the Match: Franco Fragapane’s goal in the 62nd minute was the decider between both teams at Allianz Field.

Match to Forget: Austin FC centerback Julio Cascante tried dribbling away from pressure in the last line of defense, allowing Franco Fragapane to steal the ball and finish easily for the game-winning goal.

Man of the Match: Hector Herrera did an excellent job patrolling the midfield for the Dynamo. Herrera made three tackles and won eight duels as the Dynamo earned a point in a difficult place to enter as an away side.

Moment of the Match: Sebastian Ferreira saved a point with an impressive volley from just outside the box in the fifth minute of second-half stoppage time.

Match to Forget: Brian Acosta received a red card for a tackle in which he had no chance to win the ball. The Rapids were left down a man and without much of a shot to try for all three points in the final minutes.

Man of the Match: Julian Gressel completely changed the game when he came on four minutes after the Whitecaps went down. Gressel scored the tying goal and had one key pass in 35 minutes.

Moment of the Match: Julian Gressel headed in a well-placed cross from Jasper Loeffelsend in the 87th minute to give the Whitecaps a point.

Match to Forget: Jefferson Savarino didn’t factor much into RSL’s attack, losing two of two duels and putting one shot on goal.

Man of the Match: Tommy Thompson notched two assists from the right side, sending in crosses that were finished by Benji Kikanovic and Cade Cowell.

Moment of the Match: Cade Cowell ended LAFC’s seven-game winning streak with an emphatic volley at the back post in the 77th minute. It was Cowell’s second MLS goal this season.

Match to Forget: Ilie Sanchez left LAFC shorthanded for the final minutes with a red card in the 79th minute. Sanchez also found himself in no man’s land on Cade Cowell’s goal two minutes beforehand.