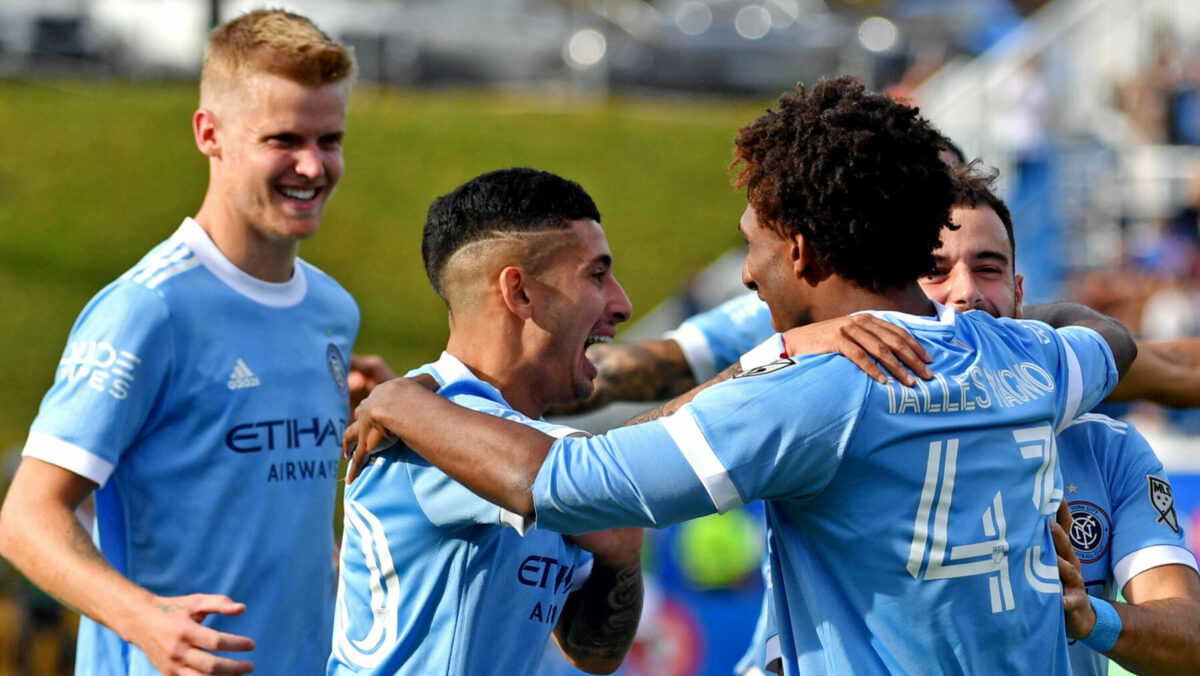 New York City FC has shown two different sides to its game in the MLS Cup Playoffs so far, and after reaching its second-consecutive Eastern Conference Final on Sunday, Nick Cushing’s side will be hoping for a mixture of both to return to the league championship.

NYCFC breezed past CF Montreal 3-1 at Stade Saputo using goals from Maxi Moralez, Heber, and Talles Magno to earn its second victory this playoff run. After dominating possession and offensive chances in a 3-0 first round victory over Inter Miami, NYCFC made the most of their chances against CF Montreal, scoring on two of their four shots on goal and also playing strong defensively to reach the final four of the playoffs.

“We had a lot of momentum,” Cushing said postmatch when asked about his team’s offensive performances against Inter Miami and CF Montreal. “The last two playoff games have shown two sides to our game. Against [Inter] Miami, we were dominant. Against [CF] Montreal, we played on the counterattack. We showed that we can suffer and defend the box. I think that gives everybody a lift because as long as we play in the moment, we have a good chance against anybody.

“I think playoff games can throw anything at us,” he added. “Like I said, against [Inter] Miami, we had control of the game, we managed to score beautiful goals and came off the pitch with high confidence. In comparison to today, we had to suffer and play on the counterattack. I knew the game would be 50-50 because I think they [CF Montreal] are an exceptional team. They are really well coached, and play good football. They can go down both sides of the pitch, cross it and score. They can go direct with pace. I think we have learned that as long as we play in the moment and stay logical, and don’t get emotional and desperate, then we can get over the line and win in any way.”

Both of NYCFC’s first-half goals on Sunday capped off counter-attacking chances for the defending MLS winners, shredding through a CF Montreal defense before relying on Moralez and Heber to deliver confident finishes. Even after halftime, NYCFC kept their foot on the gas, using creativity from Gabriel Pereira to draw a penalty kick in the 63rd minute, which Magno slotted home.

Despite being out-possessed and out-passed on the afternoon, NYCFC showed once again that they don’t need many opportunities to score. Moralez and Heber celebrated goals of their own for the second-consecutive match, while midfielder Santiago Rodriguez assisted once, continuing to excel in his No. 10 role.

NYCFC’s growing group of attackers have risen to the occasion during the MLS Cup Playoffs, a theme both Cushing and Heber hopes continues as they move forward.

“Today, we wanted to be better with the ball, but we also knew that there would be moments where we would have to play low,” Cushing said. “We knew we would get the chances on the counter with Santiago [Rodríguez], Gabriel [Pereira], Heber, and Maxi [Moralez]. We wanted to be clinical in the box. We showed that with the goals and the penalty, that we can go forward and that we have quality. We were deadly on the counterattack.”

“It doesn’t matter where we play, whether it be home or away,” Heber said. “We just need to play our style. It’s our DNA. Today, we showed everybody how strong our squad is. Especially when [Maxime] Chanot, and Maxi [Moralez] went out. The guys that came on did well. We just have to continue following what the coach says because we will have success.”

NYCFC will now prepare for a trip to No. 1-seeded Philadelphia Union in the Eastern Conference Final, the second-straight meeting between the two clubs in the past two years. A total of 12 Union players were unable to feature in the 2021 East Final due to the league’s health and safety protocols, a match that NYCFC won 2-1 and used to advance into MLS Cup.

The Union have defeated NYCFC twice during the 2022 regular season and are unbeaten at Subaru Park in 18 combined league matches this year. NYCFC will have experience on their side after lifting MLS Cup last season, but are wiping the slate clean in terms of their past successes in Chester, Pennsylvania.

“I expect a Philadelphia [Union] team to be incredibly motivated,” Cushing said. “Especially the 12 guys that did not get the chance to play last year. For us, we just have to play a football game. We have to make sure, like we did today, that no matter what that game throws at us, that we can be the best version of ourselves. We’ll have to defend the box well, sit low in moments, be good with the ball, create chances and be clinical. I think what we have done well in last year’s and this year’s playoff run is just playing the next game, forgetting the emotion, occasion, and narrative. If we do that, continue to focus on the next game, and keep winning, who knows where we will get to.”

“The game against Philadelphia [Union] will be a very difficult game because Philadelphia were the best team in the Eastern Conference,” Heber said. “We know it is not easy to play over there [Philadelphia], but we are a very strong team and it will be a great game.”​​​​​