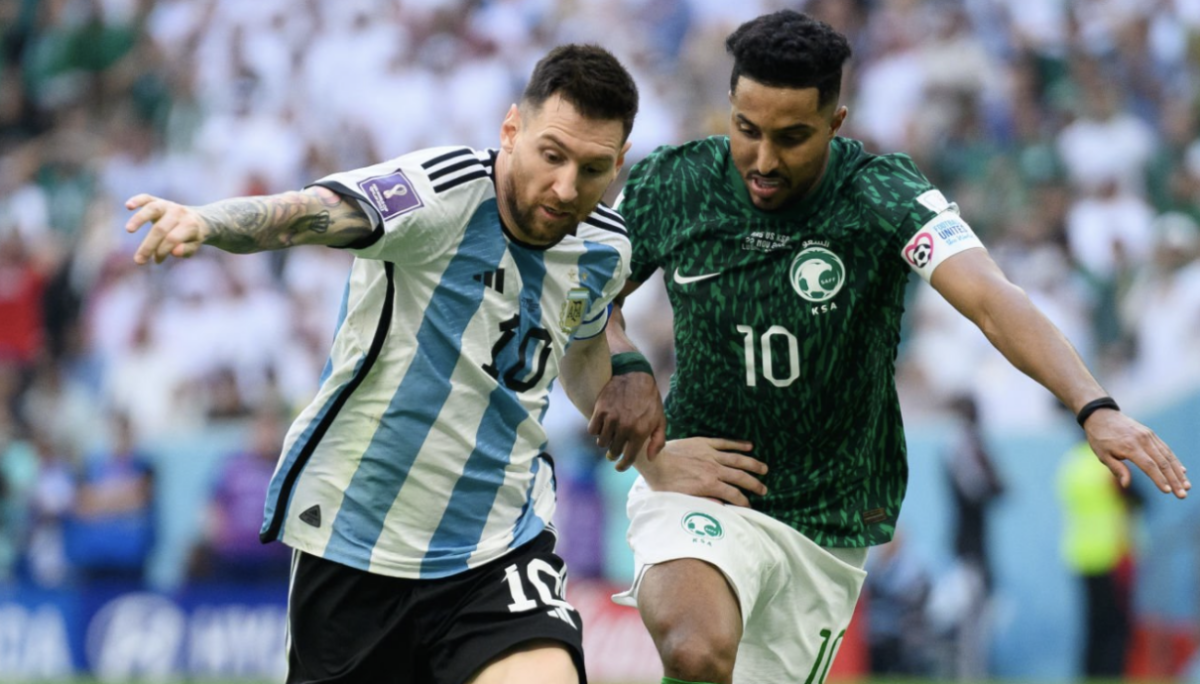 It only took until Matchday 3 of the 2022 FIFA World Cup for the first major shock of the group stage with Saudi Arabia stunning tournament contender Argentina.

Saudi Arabia moved to top of Group C following a 2-1 comeback victory over Argentina at Lusail Stadium. Salem Al-Dawsari and Saleh Al-Shehri scored four minutes apart in the second half while Saudi Arabian goalkeeper Mohammed Al Owais made five saves in the win.

Argentina struck first in the 10th minute as Messi stepped up to the penalty spot and beat Al Owais for a 1-0 advantage. VAR ruled in favor of a penalty kick after Saudi Arabia right back Saud Abdulhamid fouled Leandro Paredes in the box.

Argentina came close to adding to its lead later in the half, but Lautaro Martinez’s finish was waved off by VAR. The Inter Milan striker was whistled for offsides, giving Saudi Arabia a lifeline as the match proceeded.

Saudi Arabia equalized four minutes into the second half as Al-Shehri danced past Cristian Romero and blasted a shot into the bottom-right corner. It was just the start for Saudi Arabia’s attack, which propelled themselves into the lead just for minutes later.

Salem Al-Dawsari cut into the box on his right foot before sending a curling shot past Emiliano Martinez. Martinez got a fingertip to the shot, but was unable to keep it out as Saudi Arabia celebrated a monumental lead.

Argentina tried its best to find a tying goal late but were unable to avoid a disastrous group stage start. Julian Alvarez’s stoppage-time effort was cleared off the line by Abdulelah Al Amri, sealing the victory for Herve Renard’s squad.

Saudi Arabia will next face Poland on Saturday while Argentina takes on Mexico.

Here is a closer look at all of Tuesday’s World Cup results:

Mexico and Poland squared off on Tuesday aiming to take advantage of Argentina’s slip-up in Group C, but neither could find the back of the net in a goal-less draw.

Guillermo Ochoa denied Robert Lewandowski from the penalty spot in the second half while Wojciech Szczesny made four saves as both keepers posted clean sheets.

Szczesny was the busier of the two goalkeepers, pushing Henry Martin’s effort over the crossbar prior to halftime. The Juventus shot-stopper also repelled Jesus Gallardo’s shot earlier in the half, continuing to come up clutch for his team.

Poland had a golden opportunity to break the deadlock in the 58th minute after Hector Moreno pulled down Lewandowski in the box. However, the Barcelona forward was denied by Ochoa, who dove to his left to punch away Lewandowski’s shot.

Both teams continued to pressure one another as the second half went on, but neither could deliver the final ball. Grzegorz Krychowiak’s shot missed the target in the final minutes, summing up Poland’s afternoon in front of goal.

Defending World Cup champions France received an early sucker punch from Australia in its group stage opener on Tuesday, but responded in a big way to claim three points.

Olivier Giroud scored twice while Adrien Rabiot and Kylian Mbappe also celebrated goals of their own in a 4-1 comeback victory. Giroud’s two tallies tied him with Thierry Henry atop France’s all-time goalscoring list.

Craig Goodwin shocked France by delivering the opening goal for Australia after only nine minutes. Matthew Leckie’s fizzing cross was met by Goodwin, who beat Hugo Lloris for a 1-0 Australia lead.

France responded well though and eventually turned things in their favor later in the half. Adrien Rabiot’s powerful header left Australian defenders stunned and tied things up in the 27th minute before Giroud’s one-time finish made it 2-1 to Les Bleus.

Kylian Mbappe extended France’s lead to 3-1 in the 68th minute after his backpost header off an Ousmane Dembele cross gave Les Bleus some breathing room. Giroud capped the scoring for France in the 71st minute, heading home Mbappe’s cross to tie him with Ecuador’s Enner Valencia atop the World Cup Golden Boot list.

France faces Denmark on Saturday while Australia takes on Tunisia on the same day.

Denmark held majority of the chances in its World Cup opener against Tunisia, but Kasper Hjuilmand’s squad had to settle for one point in a goal-less draw.

Aymen Dahmen made five saves for the African country, helping Tunisia earn a favorable result in Group B action. Kasper Schmeichel posted a one-save shutout for Denmark, making his lone save on the verge of halftime.

Schmeichel stood tall to deny Issam Jebali in the 43rd minute, keeping the score level heading into the interval. The former Leicester City man had little to do in the match, but rose to the occasion when his team needed him.

Christian Eriksen’s shot in the 69th minute was repelled by Dahmen before the 25-year-old received help from his post shortly after. Andreas Cornelius’ touch off a corner kick looked destined to nestle into the bottom corner, but the post got in the way of an opening goal for Denmark.

VAR waived off a stoppage-time penalty shout from Denmark, forcing both teams to share the spoils from Al Rayyan.