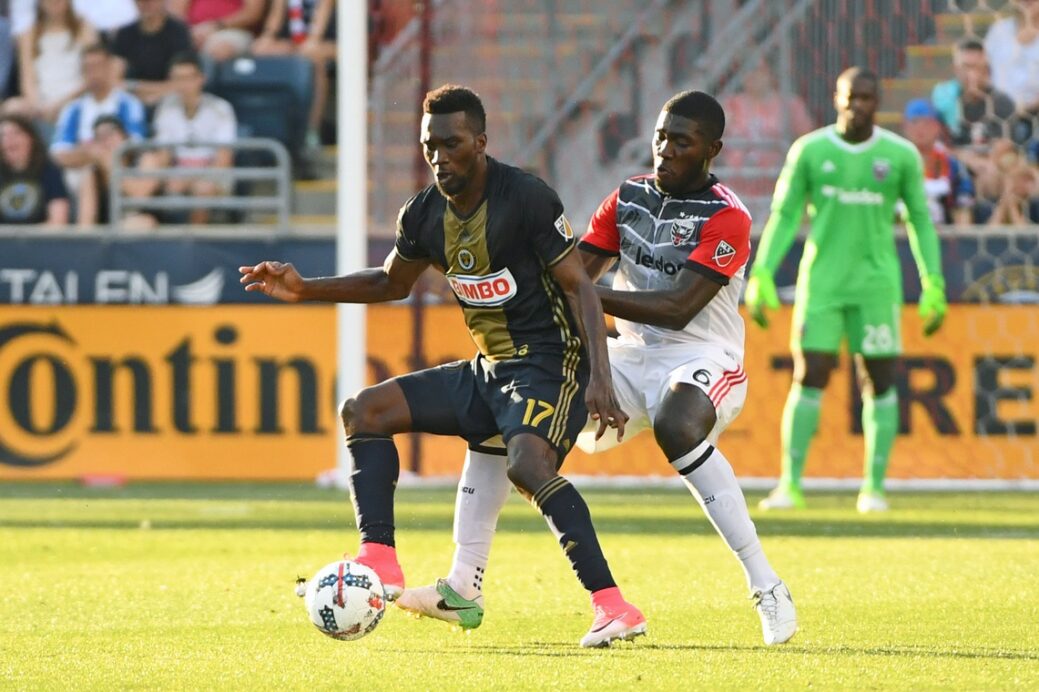 CHESTER, PA–The up and down season of the Philadelphia Union rolled onto the incline in a rollercoaster 1-0 win over D.C. United at Talen Energy Stadium on Saturday night.

Fafa Picault scored his fourth goal of the season to help the Union avoid their second four-game losing streak of the season. The win also boosted Jim Curtin’s men out of the MLS basement and into ninth place in the Eastern Conference.

The first half produced little in terms of excitement until the 31st minute, when Picault blasted a shot into the bottom part of the goal past a diving Bill Hamid. Alejandro Bedoya’s cross from the right wing appeared to be intended for C.J. Sapong, but the ball missed the forward, and luckily for the Union, Picault was there to pound his fourth goal of the season into the net.

Bedoya’s assist was just his second in a Union shirt, with his other handout for the club coming in the 4-0 win over D.C. at RFK Stadium on May 13.

The second half didn’t come alive until the 70th minute, when the visitors were handed a penalty on a needless extension of the arm by Oguchi Onyewu while defending a Taylor Kemp cross. Lamar Neagle telegraphed his penalty and it was denied by Andre Blake near the left post.

Things appeared to mount up against D.C. in the 74th minute, when Luciano Acosta appeared to be sent off by referee Sorin Stoica, but minutes later, the ejection was rescinded.

As the confusion began to settle, Bill Hamid was forced into action with a quick save on substitute Jay Simpson in the 78th minute. Hamid followed that up with an easy denial a minute later.

Deshorn Brown came close to threatening the Union goal in the 81st minute, but the attempt from the newly-signed striker went wide to the left of Blake.

In the second minute of stoppage time, Blake came up with another huge save, as he tipped a shot on to the bar and our of play.

The Union return to action on Wednesday in the U.S. Open Cup against the New York Red Bulls on Wednesday, while D.C. visits Montreal on Saturday in MLS action.

Andre Blake made two critical saves, one on the penalty and the other in stoppage time, to preserve his team’s sixth clean sheet of the season.

Blake’s denial in stoppage time prevented a crisis in Chester. If he doesn’t make that save, the Union would’ve walked off the pitch with their heads hung long and one point.

Lamar Neagle missed the penalty in the second half, and he had his header denied by Blake in the waning seconds of the game.