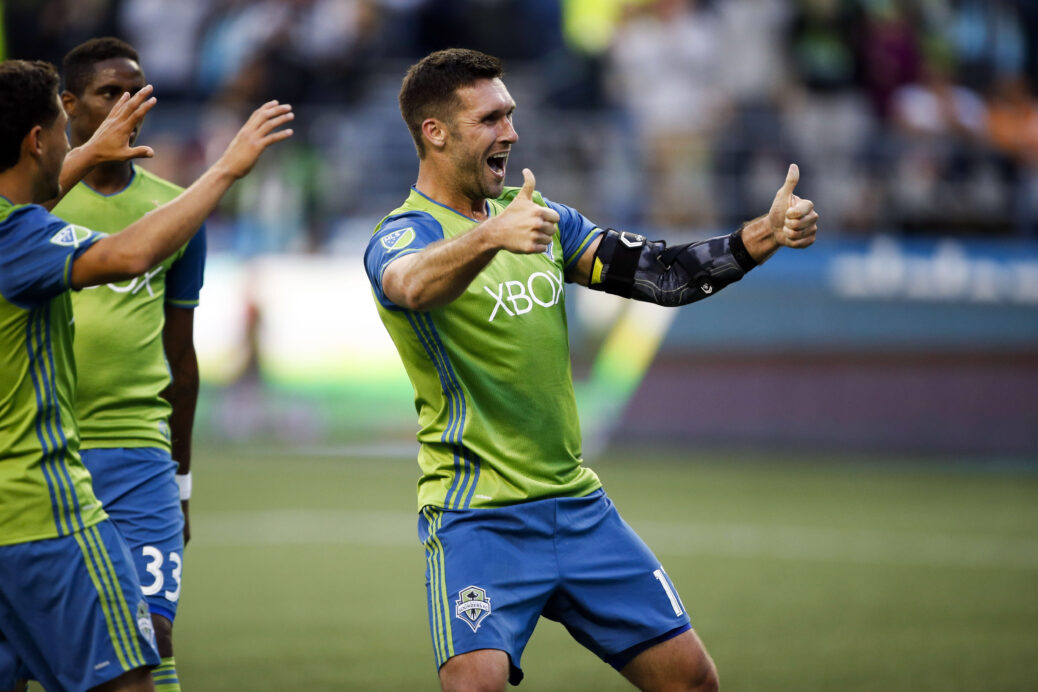 SEATTLE– It was never going to be an attractive affair. The Seattle Sounders have struggled to score all season and were missing Clint Dempsey and Jordan Morris to international duty. Lone forward Will Bruin, returning to action for the first time since dislocating his elbow, played with his left arm in a sling that clearly limited his mobility. And the Sounders faced a revitalized Houston Dynamo side that — having gone winless through six road matches this season — looked content to sit back and leave town with a scoreless draw.

It took 69 minutes and was in fact never pretty, but the Sounders finally found the goal they needed to secure a much needed 1-0 win in front of 40,258 at CenturyLink Field on Sunday night. The Sounders struggled to convert possession into danger all evening, but with just over 20 minutes remaining Bruin slipped between Ricardo Clark and A. J. DeLaGarza to head a Cristian Roldan cross past Dynamo goalkeeper Tyler Deric.

It was the fourth goal of the season for the longtime Dynamo striker, tying him with Dempsey for the club lead.

Second-half substitute Alberth Elis missed a golden chance to equalize in the 86th minute, tracking down a Mauro Manotas through ball behind the defense but sailing an open look past the far post.

With the win, the Sounders (5-6-4, 19 points) did vital work in keeping themselves in the thick of the playoff race as they await the return of Dempsey and Morris and, presumably, the arrival of a major midsummer acquisition. It was also the third straight 1-0 home victory for the Sounders, who fielded their first-choice defense for the first time all season. Center back Roman Torres returned from a nagging hamstring injury to make just his third start since mid-March.

The loss leaves the Dynamo (7-6-2, 23 points) with an 0-6-1 road record this season. They have not won a road match since mid-September of last year, and have not scored a goal at CenturyLink Field in four years. While they seem to have finally turned the corner as an organization, the road woes continue unabated. And while the Dynamo still sit in second place in the Western Conference, they are now 1-3-1 in their last five matches.

For much of the night, though, it looked like the Dynamo might well escape with a point.

Despite owning more than 70 percent of possession for almost the entire first half, dangerous moments were few and far between for the Sounders. Gustav Svensson enjoyed the first good look of the half in the 32nd minute, but one-touched a shot from the top of the penalty area over the crossbar. It was one of just four shots the Sounders managed all half.

While the Sounders controlled play early, the visitors created the first promising chance of the night in the 13th minute. Erick “Cubo” Torres worked a quick give-and-go with Andrew Wenger, slipping into space behind the back four but failing to challenge goalkeeper Stefan Frei. Ten minutes later, Manotas rifled a 25 yard shot on frame, but he too failed to seriously challenge Frei. That was the extent of the threats posed by the visitors until the game’s waning minutes.

Adolfo Machado may have gotten away with a handball just before the hour-mark, as an Alvaro Fernandez cross from within the penalty area deflected off Machado’s raised arm.

Looking forward, the Sounders do not return to league play until visiting NYC FC on June 17, although they will host the Portland Timbers in the fourth round of the U.S. Open Cup on June 13. The Dynamo visit North Carolina FC (NASL) in Open Cup play on June 14 before a road match against the LA Galaxy on June 17.

Have to give the nod to Will Bruin, who battled a clearly painful injury to score the game-winning goal in his first match against the Dynamo after six seasons of service in Houston.

The Dynamo took only eight shots all night and were happy to leave a single forward up top, but they nearly managed a 1-1 draw when Elis broke through Seattle’s back line in the 86th minute. That one will be haunting the young Honduran tonight.

The Sounders’ attack. With Bruin sitting alone atop a 4-2-3-1 formation, Seattle needed to put bodies around him to provide any threat and generally failed to do so, especially in the first half. For much of the night Bruin was a man on an island.