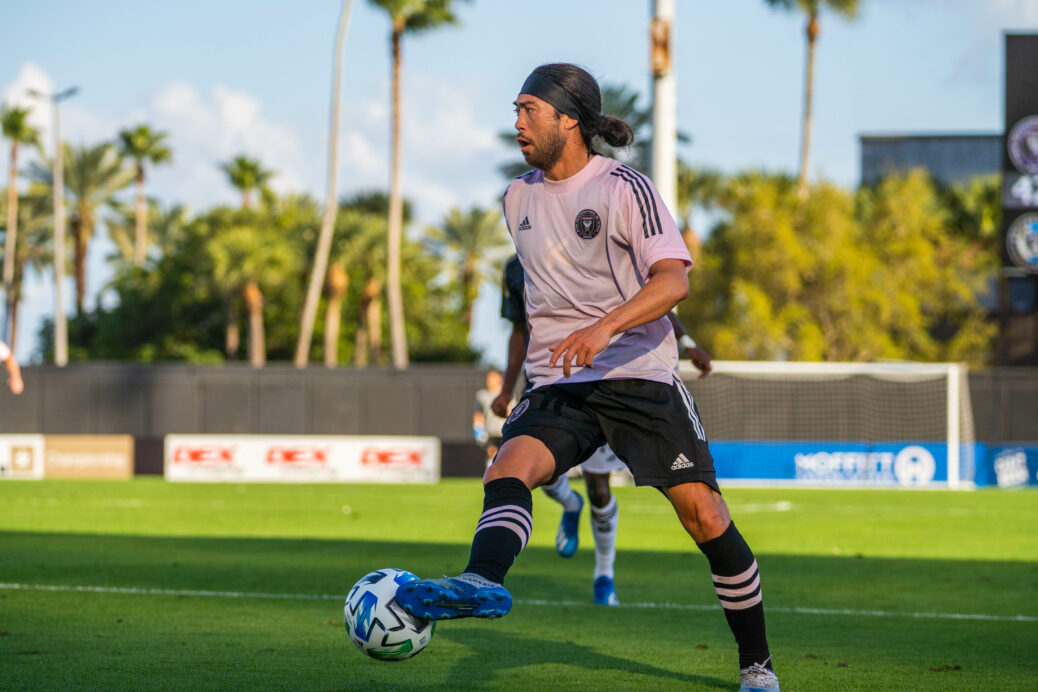 Inter Miami played its first official preseason match on Saturday afternoon in a 2-1 loss to the Philadelphia Union, and the performance in it from the MLS expansion club was a mixed bag.

Rodolfo Pizarro and Lee Nguyen were two of the brightest spots for an Inter Miami team that debuted to the general public by demonstrating a free-flowing and attractive style at Al Lang Stadium. However, an inability to create numerous quality chances and injury to another attacker left Inter Miami with plenty to chew on two weeks out from its much-anticipated season opener.

Here are three things we learned from Inter Miami’s preseason defeat to the Union:

TACTICS PRIORITIZE KEEPING BALL ON GROUND AT ALL COSTS

In its first public match, Inter Miami stayed true to all of the preseason talk about trying to play a proactive and possession-based style. The expansion club started Saturday’s match a bit slow, but settled in after the first 10 minutes and began demonstrating an aesthetically-pleasing brand of soccer that should excite fans in Miami.

Playing in a 4-2-3-1 formation, the team kept the ball on the ground and by instruction practically refused to hit any long balls, be it direct lobs up the field or clearances into the stands. There were at most four of those type of plays from Inter Miami over the course of the 90 minutes, as the team prioritized taking care of the ball via the use of shorter combination passes and movement across all of its lines to advance up the field.

Wil Trapp was often tasked with either dropping in as a third centerback to collect the ball from goalkeeper Luis Robles or to be the first outlet for centerbacks Roman Torres and Nico Figal. Trapp started sequences for Inter Miami regularly, and, aside from one play early on in which he was caught in possession deep in his own half, was fairly effective.

As could be expected with an expansion team in preseason, though, the play was certainly not perfect. Inter Miami had some bad moments, particularly in the first 45 minutes, in which players needlessly turned the ball over in their own half. Left back Ben Sweat and to a lesser extent right back Dylan Nealis were especially guilty of that, and it was in fact a poor one-timed effort down the flank from Sweat under little pressure that led to the throw-in that resulted in the Union’s first goal.

The second half saw Inter Miami be much cleaner on the ball, which allowed it to better dictate play. Notably, there were not many clear scoring chances during the closing stanza, but there were long spells of possession that pinned the Union in their own half and allowed Inter Miami to be the protagonists.

“From Day 1, (Alonso) came in here and he says, ‘We want to play football from the back to the front,'” said midfielder Lee Nguyen. “No matter what, he emphasizes he wants us to try to play, keep it on the ground, and eliminate as much long balls as possible so that it give us a chance to play the style of football he wants to play.”

Inter Miami lost starting striker Juan Agudelo to a right hamstring injury about 30 minutes into the match, and he told SBI afterwards that he felt a tweak in his leg when trying to avoid colliding with Union goalkeeper Andre Blake after initially attempting to race to the ball.

There is no word yet on the severity of Agudelo’s injury, but losing him for any considerable amount of time would put Inter Miami in a tough spot. Fellow forward Julian Carranza was recently lost to a foot injury for 10-12 weeks and Matias Pelligrini looked physically overmatched and uncomfortable when shifted into the striker role in Agudelo’s absence on Saturday.

“We’ll keep looking,” said Alonso. “There are other players that can do the job, like (Robbie) Robinson and (Jerome) Kiesewetter. We can also play with a false nine, that can come back and get involved in the play and open the space and then have wingers that can penetrate deeper. There could be other options.

“It’s up to the head coach to find them and try to solve them and we’ll keep working hard with the owners and executives to be able to make a really good team.”

With a pack of ice bandaged around his right knee, Juan Agudelo limps towards the Inter Miami locker room after the halftime whistle.#InterMiamiCF #DOOP #MLS pic.twitter.com/rEoWFr2o5R

Inter Miami is admittedly in the market for a striker from abroad, but talks with whomever is targeted might have to ramp up given the current situation at striker and how soon the MLS season begins. Because for all its possession and pretty soccer, Inter Miami lacked punch in the final third for much of Saturday’s encounter.

“We need to have more penetration in the attack and more mobility up top to be able to generate more chances on goal,” said Alonso. “… I think we have good build-up in the attack, good movement in the midfield, we find the numerical advantages quickly. But we need to take advantage of them more in the final third and look for the movements and become more vertical and know when to change the speed of play.”

Despite not having had a full training session with the team yet, Pizarro celebrated his 26th birthday on Saturday with a notable performance. The Mexican international that just arrived in Miami on Thursday came off the bench to replace the injured Agudelo around the half-hour mark and scored just minutes later with a composed and classy finish in the penalty area.

With his soft left foot and propensity to try and play forward, Pizarro was very clearly the most confident and talented player on the field on Saturday. His introduction gave Inter Miami’s attack a needed injection of energy and creativity, and led to several of the team’s best chances on the day. Pizarro’s impact faded in the second half, but overall he showed well for the team.

His solid outing, however, once again the raised questions as to why he has not yet been officially announced as an Inter Miami player. The team has said in recent days that it is still finalizing details with the playmaker, but what exactly is the hold up is unclear and made all the more curious by the fact that he played, and scored, on Saturday.

Luis Robles (5.5) — Did not have a whole lot to do, and used his feet more often than we have seen in years past.

Dylan Nealis (5) — Defended with heart and effort, but struggled in possession with his passing.

Roman Torres (6) — The bruiser of the back line, Torres was a rock. He won almost all his duels and fouled smartly a few times.

Nico Figal (6.5) — The more cerebral centerback showed an excellent reading of the game as well as good technical skills on the ball.

Ben Sweat (4) — Struggled mightily with his passing, touches, and decision-making. A poor one-timed effort that went out of bounds was what began the sequence that resulted in the Union’s opener.

Victor Ulloa (5.5) —Simple but effective. He moved the ball accurately and quickly from deep positions, and hit one stinging shot just wide early on.

Wil Trapp (6) — The orchestrator of many of the best sequences, Trapp used a range of passes to help keep possession. Had a nice crunching tackle, too.

Luis Argudo (5) — Largely invisible in the attack, but regularly showed for the ball and put in the work defensively.

Lee Nguyen (6.5) — Selflessly passed to Pizarro on the equalizer and was very keen on getting on the ball to combine with teammates. Might have been sent off with a second yellow card had this not been preseason.

Matias Pellegrini (4.5) — Ineffective and physically overmatched after being moved to the striker spot. Also did not show much on the wing.

Juan Agudelo (5) — Dropped into deeper spots to pick up the ball, but left the game with an injury before he could make an impact.

Rodolfo Pizarro (6) — Provided an immediate injection of needed creativity after coming on and took his goal really well. Was much quieter in the second half.

Robbie Robinson (5) — Hustled and scrapped up top after being subbed in.