Tim Weah, the 19-year-old U.S. Men’s National Team winger sidelined with a leg injury since August, could make his competitive return for Lille this weekend after his manager Christophe Galtier pronounced Weah “fit” ahead of Sunday’s Ligue 1 match vs. Marseille. 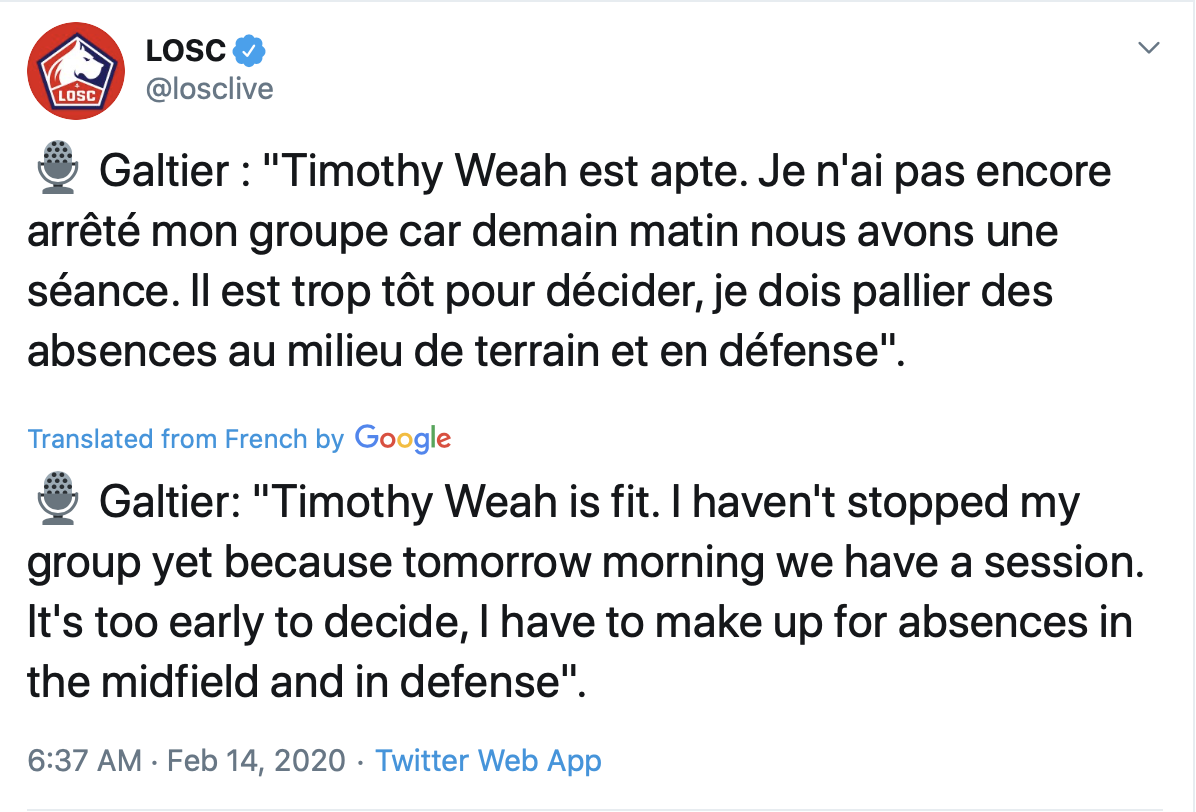 “Timothy Weah is fit,” Galtier said. “I haven’t stopped my group yet because tomorrow morning we have a session. It’s too early to decide, I have to make up for absences in the midfield and in defense.”

Suspensions to Lille midfielders Benjamin Andre and Xeka could open the door for Weah to feature in Lille’s upcoming match on Sunday against Marseille. He should at the very least make the Lille bench, but has an outside shot of starting if Galtier chooses to shift him into central midfield, where he played in Lille’s season opener, or if Galtier chooses to slide Jonathan Ikone into central midfield and start Weah on the right wing.

Weah has played just twice for Lille this season following his $12 million move from Paris Saint Germain last summer. He suffered a torn hamstring in training shortly after the second match. Weah returned to training in January.

Weah, who turns 20 on Feb. 22, could now contend for a role in Olympic qualifying in March, or receive a full USMNT invite for the March friendlies against Te Netherlands and Wales. An Olympic qualifying role appears less likely given the fact Lille isn’t obligated to release him, and would probably be hesitant to let him go considering his recent injury layoff.

Weah played eight times for the USMNT in 2018, but has yet to feature under Gregg Berhalter due to the injury. Berhalter said Weah was in line for a call-up to the USMNT’s September friendlies against Mexico and Uruguay prior to the hamstring injury.

A call for the March friendlies would make plenty of sense considering the USMNT’s need for winger options. Berhalter will be expected to call in teen Borussia Dortmund sensation Gio Reyna as one new face, but a healthy Weah would be a safe bet, especially if he can start to earn regular minutes for Lille.

Americans fans last saw Weah in a U.S. uniform last summer, when he was one of the standouts on the U.S. Under-20 national team at the Under-20 World Cup, serving as one of the key figures on a team that reached the quarterfinals.

Weah’s imminent return is some sorely-needed good news on the USMNT injury front after the recent developments with Zack Steffen and Tyler Adams. Steffen recently returned to England to have his knee evaluated due to persistent issues, while Adams is set to miss at least a week with a groin injury that will force him out of RB Leipzig’s upcoming UEFA Champions League clash with Tottenham.