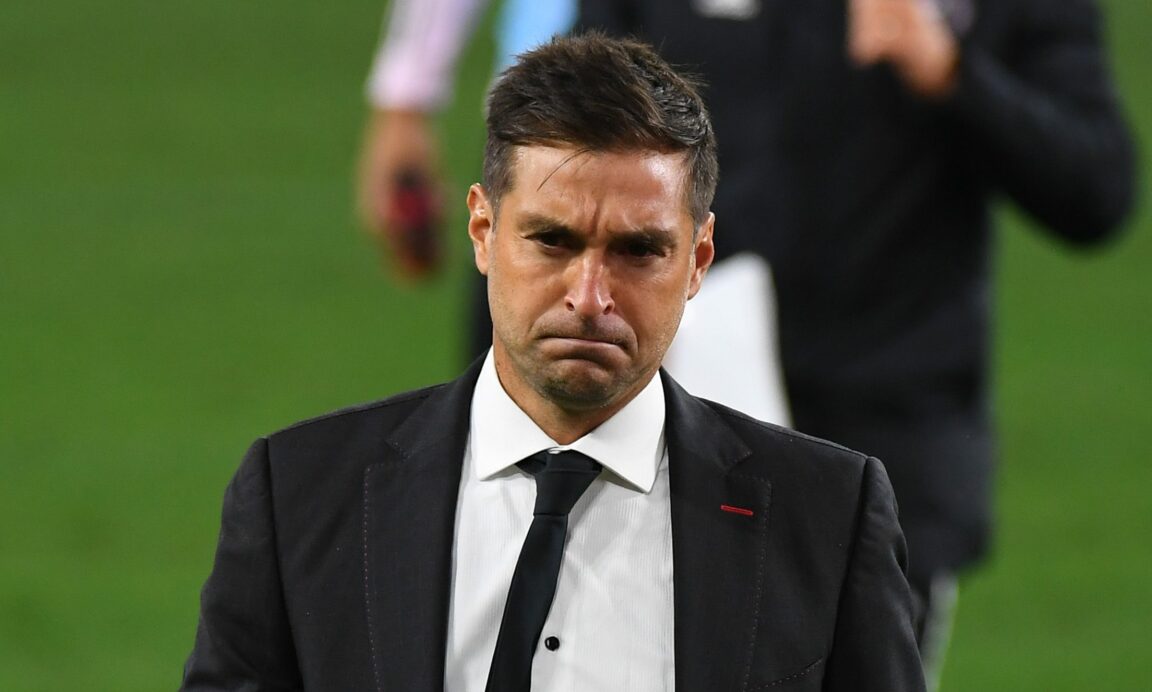 Inter Miami’s 2020 season ended with an emphatic thud on Friday night in a dismal 3-0 road loss to Nashville SC in a playoff match that was equal parts disappointing and maddening. The lopsided result ended the South Florida side’s postseason run before it ever really got going, and a big reason for the elimination was head coach Diego Alonso’s game plan.

Forced to make do without Gonzalo Higuain and Leandro Gonzalez Pirez because of positive COVID-19 tests and Andres Reyes due to yellow card accumulation, Alonso had Inter Miami come out in a narrow 5-3-2 formation. Truthfully, it played out more like a 5-1-2-2, but regardless it proved detrimental from the onset as there seemed to be real confusion and a lack of cohesion between the attack and the defense.

Alonso’s tactical instructions were to press Nashville SC from the start, but the back line often stayed deep while the midfielders and attackers regularly took up more advanced positions up the field. The team did not move as one unit and that resulted in Inter Miami’s lines being too far apart, too disorganized, and too out of sync, making for large swaths of space that Nashville SC exploited effectively.

“I think Nashville is very good at, honestly, playing kickball,” said defender A.J. DeLaGarza. “They had their centerbacks and they played 60-yard balls in the air and with our midfield pressing and our 6s pressing and Wil (Trapp) pressing and Blaise (Matuidi) trying to press, it left a lot of gaps between the defenders and the midfield and that’s where you saw two goals come from.”

It has to be noted that Inter Miami was not able to train properly as a team over the past two weeks because of the positive COVID-19 tests, and that lack of practice very well could have led to the poor execution of Alonso’s game plan and overall disjointed display.

Still, that Inter Miami improved from the run of play around the 32-minute mark, albeit while down 2-0, when Alonso made a substitution and switched to the more familiar 4-2-3-1 speaks to how badly the Uruguayan got things wrong from the start. Rather than keep things simple and familiar for his players, Alonso overthought his tactics and tried to deploy a new look that never worked.

“We had two interior midfielders like Blaise and (Lewis) Morgan and Rodolfo Pizarro and (Juan) Agudelo on top of Nashville’s two centerbacks and two defensive midfielders to be able to pressure them directly,” said Alonso in Spanish. “Unfortunately, they started to hit the initial balls long into space and we lost second balls and from there came two or three of their scoring chances, including the opener.”

This was not the first time in recent weeks that Alonso has made a first-half change to his game plan, though. Here’s a recent example vs. FC Dallas, and here’s another vs. the Montreal Impact.

It is clear Alonso has struggled to figure out what the best course of action is with this group of players and that most of them have in turn also had difficulties responding to his tactics, something that absolutely has to be rectified in 2021.

Inter Miami was shorthanded, which meant that the team needed the star players that were available to pick up the slack and lead the side with big-time performances.

Neither of them did.

Both Blaise Matuidi and Rodolfo Pizarro had games to forget vs. Nashville SC, as both were involved in a pair of the goals given up. Matuidi failed to help close down space in the middle of the park on both the first and third tallies that were scored from central areas outside the 18-yard box, while Pizarro lost possession on plays that immediately preceded Nashville SC’s opener and penalty kick in the first half. The duo also provided very little to an attack that did not get its first shot of the game until the 44th minute on a wayward volley attempt from… right back Alvas Powell.

Of course, this defeat is not just on Matuidi and Pizarro. Alonso’s tactics as was previously mentioned were poor, almost none of Inter Miami’s players performed well, Pizarro had just come back from international duty with Mexico, and there were outside circumstances like COVID-19 not allowing the team to fully work on its game plan, that all combined to make for this poor showing.

That said, players of the quality, experience, and stature of Pizarro and Matuidi have to be counted on to do more than they did on Friday. After all, stars, especially well-paid ones, tend to turn up for successful sides in playoff games.

Game was over after second goal

For all the talk Inter Miami did in the build-up to this one with its “Solo Los Duros/Only The Tough” playoff slogan, the team practically rolled over after Nashville SC scored the second goal in the 24th minute.

Players started to drop their heads and a lot of them stopped battling for one another, probably due to a sinking feeling that there was no real way back into the game and that the season was all but over. On more than one play, including on the third goal, you saw players put half-hearted efforts in tracking back to fight for the ball. They often deferred to one another instead, hoping someone else would put out the fires rather than taking matters into their own hands when they had the opportunity to do so.

When Alonso looks back at the tape, that is sure to irk him. It is normal for teams and players to have bad games. That happens from time to time.

When it does, however, and things are not going well from a playing with the ball standpoint, there needs to be fight, effort, and attitude to try and make up for that lack of soccer. Inter Miami did not show enough of those qualities after conceding a second tally, and it led to a third that punctuated an abysmal outing that, frankly, could have ended by a wider margin.

John McCarthy (4.5) — Lack of communication with his teammates led to a soft penalty call against him. Could do little about the other two goals.

Dylan Nealis (4.5) — Lasted just 33 minutes before being sacrificed as part of a tactical change. Was partially to blame for allowing Hany Mukhtar to get to the ball on the questionable penalty call.

Alvas Powell (5) — Got forward well when moved to right back, but had very little end product and trouble with his headed clearances.

Nicolas Figal (4.5) — Failed to impede Mukhtar for the entire play that resulted in the spot kick. Had some timely interventions, though.

A.J. DeLaGarza (4.5) — Should’ve stepped up to challenge for the ball on the opener. Still, he put out some fires that prevented this from getting uglier.

Mikey Ambrose (6) — Best player on the day, primarily because he was the only one that did not make any big mistakes. Could have had an assist, too.

Wil Trapp (4) — Passed well in the second half, but did not do enough to help slow down Nashville SC’s attacks in the middle of the park.

Blaise Matuidi (3.5) — The captain did not set an example, showing a lack of effort on two goals while also failing to make a positive attacking impact.

Lewis Morgan (4.5) — Was lost playing out of position as a central mid and demonstrated rare apathy on a few moments, including the third tally. Was involved in some of the team’s few good attacking sequences, however.

Rodolfo Pizarro (3) — Gave up possession on two decisive plays that helped lead to goals and a non-factor in the attack.

Juan Agudelo (3.5) — His hold-up play was AWOL, leading to a lot of lost balls and him having a minor impact before being substituted.

Matias Pellegrini (4.5) — Came in and brought energy, but he had to put his open look away early in the second half to give his deflated side a chance.

Victor Ulloa (5.5) — Provided some bite to the middle despite it being too little too late.

Ben Sweat (5) — Had a couple of clearances after coming on for the final 14 minutes.

Diego Alonso (3) — Being shorthanded made him overthink his game plan here, choosing to put the players in an unfamiliar formation before deciding to change the tactics when the game was already too far out of reach.