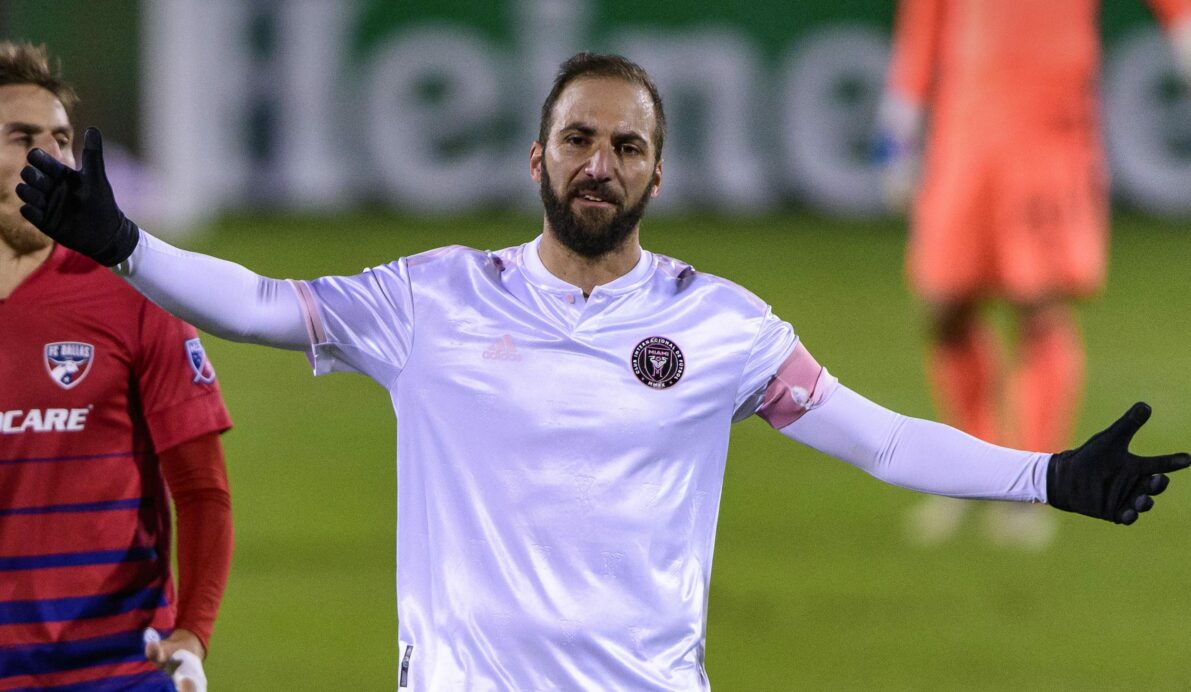 There is no denying that Inter Miami has a defensive problem that needs addressing, but there is one issue that is even larger than that.

Inter Miami suffered its 12th defeat of the season on Wednesday night after blowing a lead in a 2-1 defeat on the road vs. FC Dallas. A late goal proved the expansion side’s undoing, with Ryan Hollingshead scoring in the 82nd minute after Bryan Reynolds victimized Leandro Gonzalez Pirez in the penalty area.

Naturally, that decisive blunder will have people pointing at the defense, which is understandable to an extent. No one on that back line, however, gets paid like or has the pedigree of Gonzalo Higuain and Rodolfo Pizarro. The two Designated Players combined for a nice opener vs. FC Dallas, but their positive moments in the final third were overall too few and far between. That is why they finished with a combined three shots.

Pellegrini, Higuain and @Rpizarrot combine for the first dance of the night! #InterMiamiCF pic.twitter.com/7Gi3VI5ZG5

Of course, Pizarro’s 33rd-minute strike serves to highlight the issues that have plagued the entire season. It was the Mexican’s first tally in 11 appearances stretching back until Aug. 22 and the team’s 22nd overall goal in 21 matches, which is clearly a less-than-ideal clip.

“When we attack and we score, we take a lot of pressure off the defense,” said left back Ben Sweat. “When we don’t score, we are having to defend, defend, defend. We could defend well for an entire match and we give up 1-2 chances and the other team scores and capitalizes and everyone is looking at the defense and that’s okay. We need to hold each other accountable.”

Sweat may not have wanted to point the finger solely at the attack, but it has been crystal clear for a while now that Inter Miami’s biggest weakness lies in the final third. Part of that is due to a lack of variety in how the team plays under head coach Diego Alonso, part of that is because of the personnel and lack of creativity, and part of that is down to the star players not stepping up and delivering on a consistent basis.

On the whole, the team does not play well enough regularly enough. That is clear by the amount of issues that exist on both sides of the ball. That said, Inter Miami is going to need to score goals to reach the postseason and the onus is on the big-name players to do so.

Even if the team is not exactly firing on all cylinders from the run of play.

One of the key factors that went into how things unfolded in Wednesday night’s loss was Alonso’s decision to go very defensive after Inter Miami took the lead.

After Pizarro scored, Alonso moved away from the high press and dropped his team into a deeper defensive posture with numbers behind the ball to try and better limit the space FC Dallas had to play in. Inter Miami struggled in that regard during the opening half-hour and was probably lucky not to concede first after giving up a few decent chances, which prompted Alonso to move all 11 of his starters into more withdrawn positions to focus more on defending. Even Higuain was seen in various moments behind the ball in Inter Miami’s half.

“I thought we were doing a good job defensively (after that tactical switch),” said Alonso in Spanish. “The team was defending well, and without a doubt the penalty gets them back in the game. Without the penalty, I think the way the run of play was going could have gone on a while because of how the team was. I don’t think they would have scored because the team was strong.

“After the referee’s decision to award a penalty, they were emboldened and grew.”

Franco Jara converts the pk and ties this one up. #FCDvMIA pic.twitter.com/uGtiKIXhvf

The controversial 60th-minute spot kick was a game-changer, but so too was Alonso’s decision to sit back. His rationale for doing so to protect the lead and for wanting to hit on the counter is understandable because, again, Inter Miami was looking weak without the ball and at the back.

Still, sitting so deep to protect the lead only invited FC Dallas to have even more possession and more attacking spells. You have to have a defense that is as solid as a brick wall to go that route, and Inter Miami‘s defense has been more of a leaky dam this year.

A better plan would have been to move into defending from the mid-block, thus allowing the team to get numbers back to stay more compact while also not ceding a ton of possession and inviting the waves of FC Dallas attacks that were bound to generate something.

As good as Gonzalez Pirez was over the weekend in the win against Orlando City, he was that poor vs. FC Dallas in the second half.

Gonzalez Pirez got a yellow card that will keep him out of the next match after getting beat on an individual duel, gave up a penalty albeit questionably, and was beaten on the dribble in the lead-up to the decisive goal — all in the closing 45 minutes on Wednesday. The Argentine centerback’s performance was a far cry from that of the weekend, when he was by and large a rock at the back and the author of the game-winner.

Reynolds gave Gonzalez Pirez a good dose of trouble in this one, though it must be noted that it seemed the young FC Dallas right back was already starting to go down before contact was made on the foul that led to the equalizing spot kick. Still, the challenge was too clumsy for someone of Gonzalez Pirez’s experience and it summarized a rough night at the office for one of Inter Miami’s most dependable players this season.

Gonzalez Pirez did have some good moments, including with a few forward passes and on some other plays in which he had timely interventions. All in all, though, this was one to forget for the back line leader.

John McCarthy (5.5) — Made a quality stop on a header in the first half, but should have been more decisive on the penalty rather than staying rooted to his line.

Nicolas Figal (5) — Hurt himself while stepping on the ball with his left leg in the 23rd minute, which ended an uneventful short outing for him.

Andres Reyes (5.5) — After a slow start, got better in his first game back into the lineup. Still, picked up a yellow that rules him out of the next match.

Leandro Gonzalez Pirez (4.5) — A protagonist in this one for all the wrong reasons, including being involved in both goals conceded.

Ben Sweat (5) — Got forward and was very solid defensively aside from two plays, which unfortunately for him included the winner.

Wil Trapp (5) — Moved the ball decently while also allowing a lot of space in behind the midfield line.

Blaise Matuidi (5.5) — Like his partner in the center, was better in possession than in defense. Should’ve done better on his open header, too.

Lewis Morgan (5.5) — Lost his mark on the decisive goal, but was regularly involved in the attacks and hit a steady dose of crosses.

Rodolfo Pizarro (6.5) — Scored on a cool and composed finish in the box, and combined well with his fellow attackers in the final third.

Matias Pellegrini (5) — Helped set up the go-ahead goal, but also lost a few balls cheaply and again looked overmatched physically before coming out.

Gonzalo Higuain (5) — Hit some very good passes and looked the different player in moments. His lack of pressing at certain times stood out, however.

Dylan Nealis (6) — Only had trouble on one play in which he ball-watched. Other than that, was solid in his fill-in duty.

Victor Ulloa (5) — Checked into the match and did not make his presence felt in an overall indifferent outing.

Federico Higuain (5) — Tried to combine and find the game despite coming in very late.

Julian Carranza (N/A) — Too few touches up top to really make an impact.

Diego Alonso (4.5) — The decision to drop lines made sense to an extent, but he went too far with it and invited the type of pressure that was always going to find a way to break down a so-so defense.