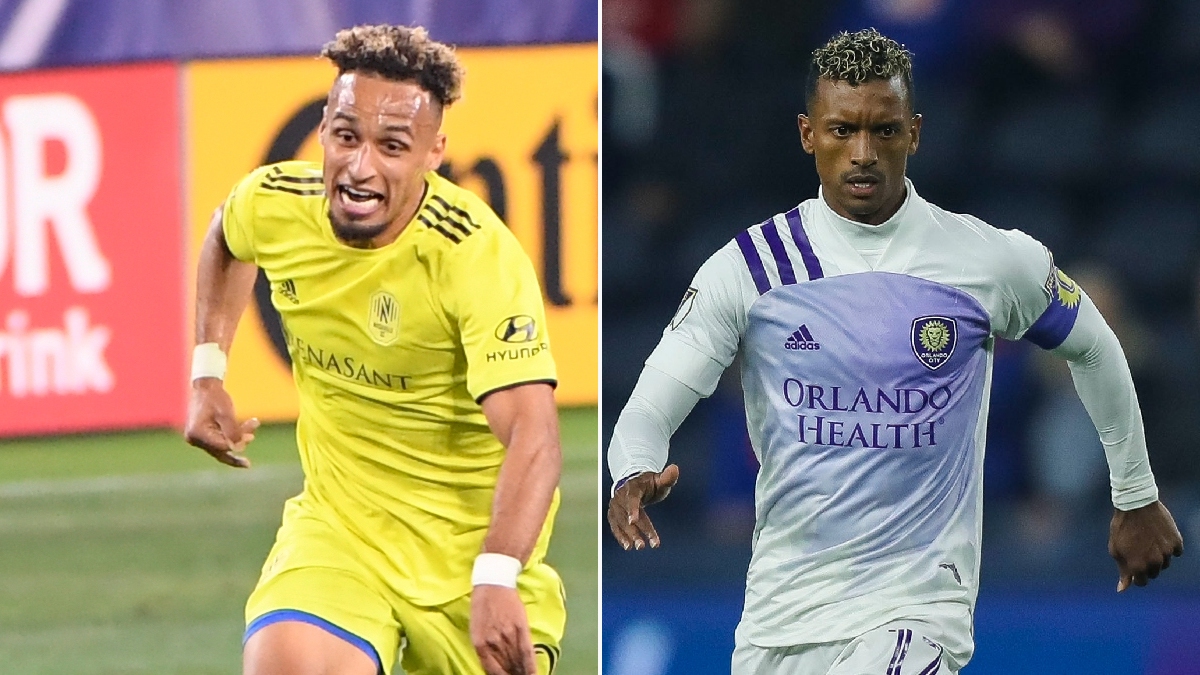 Orlando City SC and Nashville SC have met three times in 2021, and each time they played to a hard-fought draw. As they prepare to meet in the MLS Eastern Conference playoffs, they will do battle knowing there will be no draw this time around.

Led by MVP candidate Hany Mukhtar, Nashville SC finished in third place in the Eastern conference setting up the fourth showdown of the season against Orlando City on Tuesday.

Just 19 days ago, Orlando City’s Andres Perea tapped in what seemed like the winner vs. Nashville SC on a free kick from Alexandre Pato that rattled the crossbar in the 4th minute of extra time, but it was waived off due to a foul on Daryl Dike in a pile up of players near the net.

Since their Halloween day draw, both teams come into the first round of the playoffs in strong form. The Lions defeated Montreal CF to clinch the 6th seed and Nashville SC locked up a playoff spot with two matches remaining in the season.

Here’s a closer look at the first round playoff matchup:

Tuesday’s match will be the fourth meeting between the two eastern conference foes this season, but their first in the MLS playoffs. In the 2019-2020 season, Nashville and Orlando City split their season series with a win each.

Nani: One of the stars of MLS and Orlando City’s captain, the 35 year-old winger is tasked with leading the attack for manager Oscar Pareja. In 28 matches this season, the former Portuguese international has 10 goals and 7 assists.

Hany Mukhtar: The German playmaker has been a driving force behind a successful sophomore season for Nashville SC in MLS and he has become a contender for MVP honors with 12 goals and 15 assists on the season. Muktar comes into the playoffs in scinalting form for Nashville, with two goals and three assists over the last three games.

Dike will be asked to lead the lines for Orlando City against the 2020 MLS Defender of the Year in Zimmerman who is fresh off of starting for the U.S. men’s national team in their 2-0 win over Mexico and 1-1 draw against Jamaica.

Mukhtar and Randall Leal may get all the headlines for Nashville SC, but Sapong is quietly the clubs second leading scorer this season with 12 goals in 33 matches. Coming into the playoffs Sapong broke a month long scoring drought with a brace against FC Cincinnati on October 27 and the 10 year MLS veteran will be counted on for his presence in the penalty area.

Under head coach Oscar Pareja Orlando City typically elects to play a 4-5-1 formation, leaving Mendez as one of the two defensive midfielders with either Junior Urso or Andres Perea beside him. In the final game of the regular season, Mendez scored a rocket to send the Lions into the playoffs but he will likely not be needed for his goal scoring exploits, rather slowing a well-oiled Nashville attack.

Nashville SC is the favorite, especially at Nissan Stadium, but the fact these teams have tied three times this year shows just how tight a contest it could wind up being on Tuesday.

It has been an up and down season for Orlando City, but the Lions finished the season on the right note. A win on decision day and nearly defeating New England Revolution at the end of October — if not for a game-tying goal from Adam Buska in stoppage time — showed glimpses of an Orlando City team capable of beating anybody in MLS.

Inconsistency has been Orlando City’s biggest issue in 2021. Of the six other Eastern Conference teams in the playoffs, Orlando only has one win, defeating the Union 2-1 in July but a week later the Lions were hammered 5-0 by NYCFC. They do have an in-form Pedro Gallese fresh off an international break with Peru. The veteran shot-stopper made a penalty save against Venezuela to keep Peru’s World Cup hopes alive.

Keeping the Nashville attack at bay starts and ends with limiting Mukhtar. The MVP candidate scored or assisted on 51 percent of Nashville goals this season and where he goes so to does Nashville. CJ Sapong is expected to start alongside Muktar in a 3-5-2 formation, but look out for Randall Leal to push-up from the midfield and play as a third attacker with Sapong and Muktar. On the season the Costa Rican international has 8 goals and 7 assists in 31 matches played.

Mauricio Pereyra is Orlando City’s playmaker in the center with a team-high 10 assists on the season, but Nani and Daryl Dike are integral parts of the Lions attack. Dike is a true target forward who will be asked to win headers and facilitate hold-up play, but Walker Zimmerman leads a Nashville team that is great in the air, winning a league high 53.6 percent of their aerial duels.

What the Orlando City attack looks like outside of Nani and Dike remains to be seen. Lions head coach Oscar Pareja elected to start Chris Mueller in the last match against Nashville SC in October, but Benji Michel started the season finale.