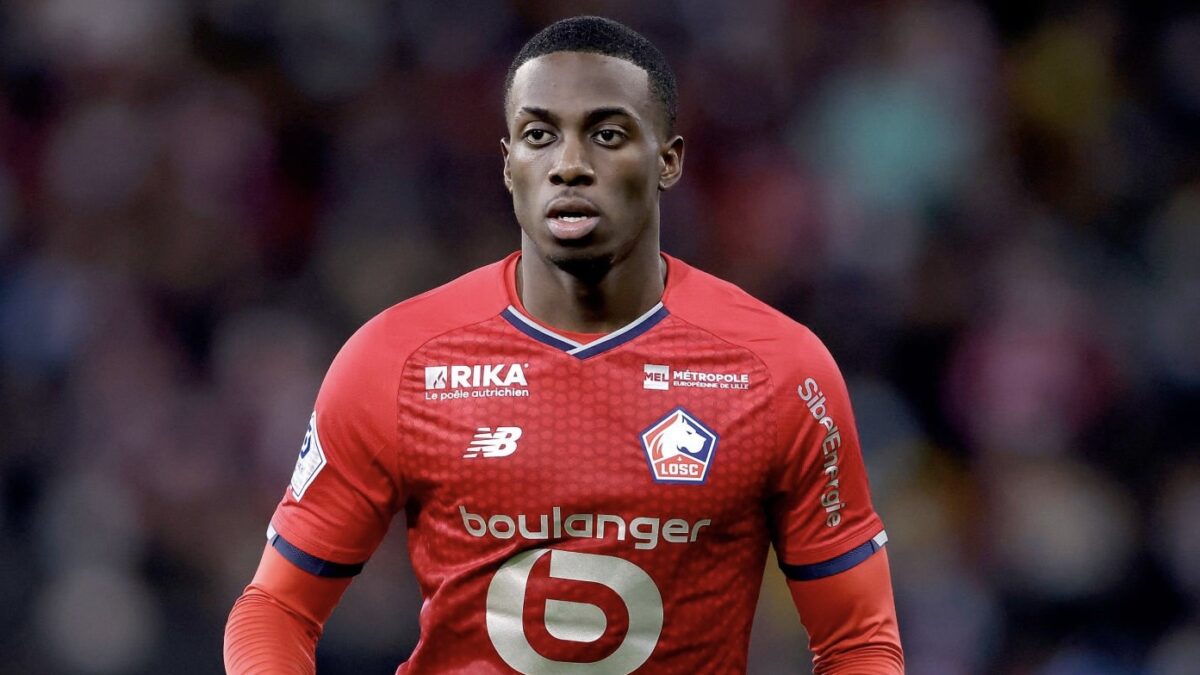 Tim Weah has been fighting to deliver for French club Lille this season, and although the Ligue 1 campaign is one week away from concluding, Weah looks to be ending the season on a high note ahead of a busy summer.

Weah scored his first league goal of the season on Saturday as Lille defeated Nice, 3-1, in its penultimate match of the season. The 22-year-old also assisted once in his strong performance, earning SBI’s Americans Abroad Player of the Week honors.

Weah made his 28th league appearance of the season on Saturday and did not disappoint as Lille moved into the top ten of the Ligue 1 standings. After watching as Nice claimed a 1-0 first-half lead, Weah connected with Canadian forward Jonathan David for the equalizing goal in the 52nd minute.

Lille continued to keep its foot on the gas as David propelled the visitors in front just nine minutes after tying the match up.

Weah delivered the final nail in the coffin in the 95th minute, picking up possession inside of Nice’s half of the field, racing towards goal and tapping into an empty net after rounding goalkeeper Walter Benitez.

Weah also finished the match with six won duels, five interceptions, six recoveries, and two chances created. With his first goal since February 2021 now under his belt, Weah will aim for a positive performance against Stade Rennes in the Ligue 1 finale before involvement in the USMNT’s four-match window in June.

Antalyaspor kept its unbeaten run going on Sunday and Haji Wright was at the forefront with another goalscoring performance.

Wright scored his 14th league goal of the Super Lig season, while also assisting once as Antalyaspor defeated Kasimpasa 4-2 away from home. The in-form forward benefitted from a failed clearance by Kasimpasa goalkeeper Erdem Canpolat, scoring into an empty net to help Antalyaspor close out the road victory.

Wright’s stellar 2022 year will have him full of confidence ahead of his first USMNT involvement this June.

Heracles Almelo suffered defeat in its Eredivisie finale on Saturday, but Luca De La Torre was one of the bright spots in the home loss to Sparta Rotterdam.

De La Torre assisted on Heracles’ only goal of the match in a 3-1 loss, giving the USMNT midfielder his first assist of the league season. The 23-year-old created the most chances in the match (4) while also making one interception and completing 96% of his passes from midfield.

Heracles will now need to win the relegation playoff later this month to avoid a drop to the Dutch second division.

SKN St. Poelten has won two of its last three league matches in the Austrian second tier with Ulysses Llanez playing a key role in both victories.

Llanez scored two goals and added one assist in a 3-1 league win over FC Wacker Innsbruck, continuing a strong run of form over recent weeks. The 21-year-old now has six goals and four assists on loan from Bundesliga club Wolfsburg, totaling 25 league appearances this season.

St. Poelten won’t be contending for promotion this season, but Llanez will aim to help the club end the season on a winning note next weekend.

Holmes won five of his 11 duels, created the most chances (2), drew the most fouls (2), and completed three dribbles in his 37th league appearance of the season. Although Holmes did not get on the scoresheet, he was impactful from the left wing, as Huddersfield walked away with a favorable first leg result.

Holmes and his Terrier teammates will prepare for Monday’s second leg at John Smith Stadium, knowing advancement will propel them to Wembley Stadium later this month.