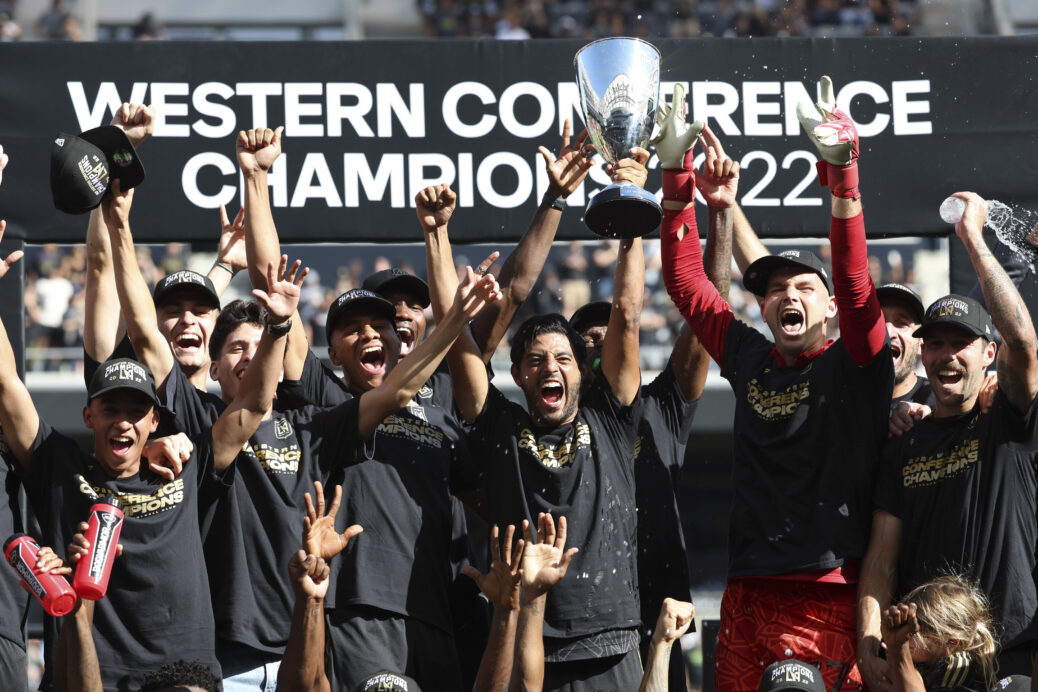 This year’s MLS Cup will be settled at Banc of California Stadium, which will play host to a championship game for the very first time.

Hometown LAFC topped Austin FC 3-0 in Sunday’s Western Conference final and will have the advantage of staying home to host the biggest game of the year next weekend.

It was a symbolic performance from the Black and Gold, who were led by their two biggest stars on the attacking end. Captain Carlos Vela and Cristian “Chicho” Arango were the initial heroes in ending Austin’s storybook season. Third-year LAFC man Kwadwo Opoku added insult to injury with a late goal to shore up any possible doubt.

Corners were the big problem for Austin on Sunday. Poor marking haunted them in the first half, and a self-inflicted wound effectively killed the game in the second.

Though it wasn’t the final goal, Vela sent the moral dagger in the 62nd minute. Instead of finding one of his own players, Austin’s Maxi Urruti wound up the recipient and couldn’t avoid a dreaded own goal.

Arango, Los Angeles’ most trusty scoring option since joining in 2021, proved to be worth his weight in gold in the first half.

In the aftermath of a wasted chance from Dénis Bouanga, Arango headed in the corner to crack the game open. The 27-year-old Colombian was too casually marked which him too much space right at point-blank. He made no mistake.

Opoku, 21, replaced Arango in the 71st minute and managed to cap off his busy shift with the punctuation mark of the game.

From distance, the Ghanaian international athletically and stylishly rifled in a left-footed shot for his first-ever postseason goal.

In addition to the obvious defensive lapses, Austin didn’t do enough to challenge LAFC. The numbers ended at a feeble seven shots overall, one on target, and a whopping disparity compared to Los Angeles’ respective 22 and 10.

The loss shouldn’t be much of a setback for the second-year club, which most would agree is ahead of schedule. Reaching the Western Conference final is a massive achievement in the hotly contested division, and is a massive overachievement in Austin’s case considering last year’s 12th-place performance.

Reaching the MLS Cup final is a first for LAFC, and their efforts to do so in the past have been shrouded by upsets and disappointments. You get the sense this is the year things will change for the ambitious club, but obviously, nothing is guaranteed at this stage.

The Angelinos now await the winner of the Eastern Conference final. Whether it be the Philadelphia Union or New York City FC, the MLS Cup road will run through Banc of California Stadium on November 5 thanks to the locals’ immaculate 67-point, Supporters’ Shield-winning campaign in the regular season.

The 2022 MLS Cup will be the 27th in league history. Of the conference finalists, only NYCFC (defending champions) has ever appeared in an MLS Cup final previously.